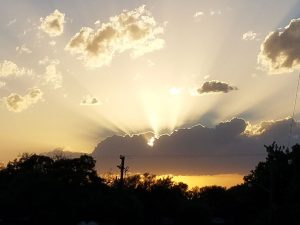 I want to relate an experience that I had a few days ago. I was standing in an open, brightly lit field beside deep woods meditating on the verse: ”But unto you that fear my name shall the Sun of righteousness arise with healing in His wings.” Malachi 4:2 (KJV). I remembered several night visions I’d had in which I saw a sunrise. I was aware that all those dreams were pictures of the Lord returning! He is the Sunrise: “Because of the tender mercy of our God, with which the Sunrise from on high will visit us, TO SHINE UPON THOSE WHO SIT IN DARKNESS AND THE SHADOW OF DEATH, to guide our feet into the way of peace.” Luke 1:78-79.

Then suddenly, I felt the Lord’s presence and received the following impressions: “You ARE hearing me! I am showing you My imminent return. My Cyrus (speaking of President Trump) will begin to release wealth to My people in his first 100 days!” I realize our president is roughhewn and I certainly do not agree with all he says and does. But I do deeply respect him and sense strongly that the Lord will use him as he did Nebuchadnezzar of Babylon and Cyrus of Persia who did not even know God, at least at first. I believe that President Donald J. Trump is the modern day fulfillment of the following verse: 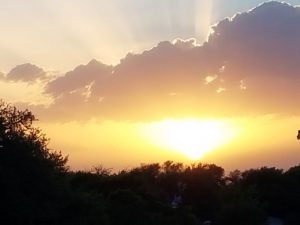 Thus says the Lord to Cyrus His anointed, whom I have taken by the right hand, to subdue nations before him, and to loose the loins of kings; to open doors before him so that gates will not be shut: I will go before you and make the rough places smooth; I will shatter the doors of bronze, and cut through their iron bars. And I will give you the treasures of darkness, and hidden wealth in secret places, in order that you may know that it is I, The Lord, the God of Israel, who calls you by your name. Isaiah 45: 1-4

The wind stirred up. I turned to my right to look again for the red cardinal I had seen in the tree behind me. I then noticed a fig tree. The Lord continued, “My fig tree will bear fruit.” I knew He referred to Israel.